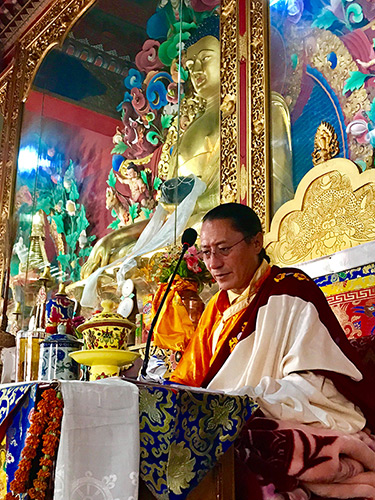 Here I will briefly describe the lineages of sutra, tantra, the oral instructions of the Natural Great Perfection,
the ripening empowerments and liberating instructions which I have received.

As for the liberating instructions,
I received a great many teachings from the suprema Druk pa Khenpo Tsewang Sonam, who is a direct disciple of Khenpo Achuk Rinpoche and Nyoshul Khen Rinpoche.

I also received many instructions directly from Khenpo Achuk Rinpoche. Specifically, as for the instructions on the Natural Great Perfection, I received them from Mewa Khenpo Thupten Oser, a true bodhisattva and a direct disciple of both the supreme Khenpo Ngakchung Thupten Pel Zangbo and the Omniscient Dza Popa Tulk. I also received many practice instructions, including the Treasury of Dharmadhatu of the great Longchen Rabjam, from the Lord of Dharma, Chadral Rinpoche.

This was written just to show the particular greatness of this lineage of definitive oral instructions, but I myself am wandering under the power of karma and the afflictions and poses not even a trace of the qualities of the paths and bhumis. Not only this, but as it is said in the treatises on worldly customs, «It is not elegant to express one's own qualities, even for the lord of the gods.» As it is not the appropriate context, just this will suffice.

As for lineages of the other schools, I received the ripening empowerments and liberating instructions of the Kalachakra and also Great Perfection teachings, by the kindness of the guide of gods and men, His Holiness the Dalai Lama.
I also received the ripening empowerments of the Path and Fruition of the Sakya tradition from the supreme Sakya Gongma Rinpoche, as well as many empowerments, oral instructions, textual explanations, etc. from Minling Trichen Rinpoche, Trulshik Rinpoche, Tulku Orgyen Rinpoche, The Refuge and Protector Chetsang Rinpoche, and many other holy beings.

This was composed in the middle of the night on the 21st of July in the water dragon year by Sangngag Tenzin Rinpoche. May virtue and goodness abound!