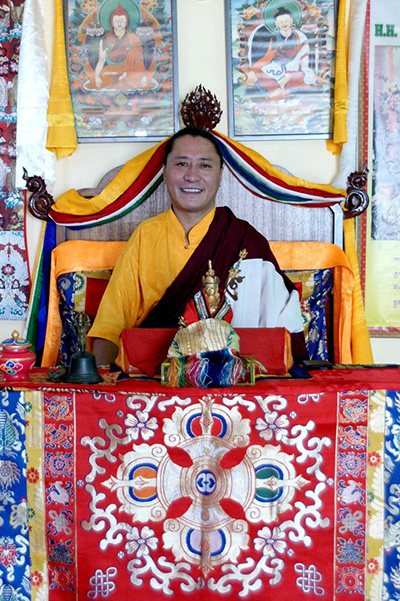 Om Swasti,
Buddhas, Bodhisatvas and entire sentient beings of all directions,
Whose all in one refugee is, Guru in true nature,
Hence, significant memoir is stated here.

Born in Metal Dog year i.e. in 1970 as the third son of a father Namdol from Golok and a mother Gangtso from Zachukha in Tibet.

In 1983 when Rinpoche was 13 years old, Golok Lama Tumpo (Pema Kusum Lingpa) visited theirs home and asked parents to call the son. The Lama recognized him as reincarnate master. He took a piece of hair from him and given a set of tantric wardrobe. Given him name Sangngak Tenzin which means the Lineage holder of Secret Mantrayana. He advised his parents,«to keep the child clean and don’t share his cup and materials with other people. In future, he would benefit all sentient beings and Buddha Dharma greatly when his spirituality awakens. Don’t worry about him. He would lead his life in a perfect way. In future he will be recognized as reincarnation of great Lama.»

After 3 years i.e. in the year 1986, The Zongchen Tulku Kunsang who is one among three well known Kun-Druk-Ling visited home. He asked for Sangngak Tenzin Rinpoche. He assured them, to not worry about anything: the food, lodging, Dharmic education etc. «The child is surely the benefactor of Buddhism and all sentient beings»,- he said and took the child to Zogchen Monastery and resided on Zogchen Labrang. After living there for almost a year, Penor Rinpoche sent a recognition letter to Tulku Thupsang about him.

One Night, he dreamt of Lama Chenrisig staying in a crystal clear palace and asked him «Go to India! You will get there safely. There you will find your karmic root Lamas and Dharma, so have a courage and go». Than he decided to go to India as a simple pilgrim. When saw a sick and poor people, he felt their pain so much so he gave them everything even his own clothes and food. All these are signs of a great Bodhisattava. He had undergone many extreme hardships when he came to India. He fled across Himalayan Mountains by foot. Firstly, He came from Kham Dergye region to Lhasa, after having crossed many high mountains and Mt. Kailash, he eventually got to Kathmandu (Nepal) in the 1992.

Shortly after Rinpoche got a great opportunity to receive Kalachakra Empowerment from Lama Chenrisig. Then Rinpoche went to Namdroling monastery where His Holiness Drubwang Penor Rinpoche kindly gave him a warm welcome and gave an official recognition letter verifying reincarnation of Kenchen Trultrim Yonten Gyatso who was reincarnation of Shang Na Nam Yeshi De- the one of 25 disciples of Guru Rinpoche. By then Tulku Sangngak Tenzin Rinpoche extensively studied and practiced Buddhism with H.H. Dalai Lama and H.H. Penor Rinpohe. Also Sangngak Rinpoche received an oral transmission of Rongzom Mahapandita’s Khabum from Khenchen Pema Sherab.

After a year, because of the health conditions, Penor Rinpoche suggested him to go to Palyul Choekorling in Bir where the weather is much better. Before going to Bir, Rinpoche stayed for 6 months in Nepal receiving the most of the great perfection’s pith instruction on practice from then the Great Zogchen Master Mewa Khenchen Thupten Ozer.

In 1994, Rinpoche received oral transmission of hidden treasures of Guru Padmasambhava from Rabjam Rinpoche and the empowerment from Penor Rinpoche in Shechen Monastery, Nepal.

In the year of 1995, he received an empowerment of Sakya Drub-thop Kundue and 80 great Mahasiddhas of India from His Holiness Sakya Trizin.

In 1996, Rinpoche received the Zogchen Namchoe Phowa and Tsa-lung thik-le's description from His Holiness Penor Rinpoche. Penor Rinpoche and many other Tulkus and Khenpos asked Sangngak Rinpoche to lead the review sessions of Phowa. During that occasion, Penor Rinpoche gave auspicious Abbot (Khenpo) title to Sangngak Tenzin Rinpoche. He served as teacher in the monastery for 5 years.

At the end of 1997, he become a Lopon in Ka-Nying Shedrupling Monastery, Nepal and taught monastic and international students for 3 years. During that time, Rinpoche composed commentary on Don Nam Nye and also assisted translator Thomas for the translation of commentary by Mipham Rinpoche of «Ornaments of Middleway » by Shantarakshita.
In 1999, he received an empowerment of Nga-gyur kama (Oral teachings) of Guru Padmasambhava from Kathog Mogtsa Rinpoche.

From 2000, Rinpoche visited Tibet for the first time after a decade of departure from homeland. There he witnessed the care and health problems of old age people in nomadic place of Tibet. So he has got a strong wish to build an old age home and a hospital. He asked His Holiness Penor Rinpoche for the blessings for the accomplishment the project and Penor Rinpoche gave his full support and appreciation.

With the contributions of those with pure vision and enthusiasm in 2001 Rinpoche accomplished the building of an old age home with 27 furnished rooms, and in 2003 a hospital in Tibet was completed.

In the following years Rinpoche visited Tibet every summer and during the winters he would visit eastern countries to give a teachings.

In October 2008, i.e on the the auspicious Guru Padmasambhava's day, Rinpoche married his consort Lhamo Yangchen in the Guru Rinpoche cave on Tso-Pema lake in India. Than the family went to Mindroling monastery, Dheradun for 4 months to receive the empowerments of Rinchen Terzoe (Hidden Treasures) of Guru Padmasamba from Taklung Tsetrul Rinpoche.

Uplifting and helping beings on many levels as well as protecting and spreading the Buddha Dharma to the world.